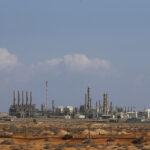 Libya’s Waha Oil Company announced last Wednesday the restart of production operations at the Dahra oilfield in the Sirte Basin, which has been shut down since 2015 due to an ISIS attack.

The company, which is a consortium of TotalEnergies, ConocoPhillips, Hess and National Oil Corporation (NOC), said the “test operation of the PL5-1 station and the main station of Dahra has started” with station PL7-2 to start up next week.

Production is expected to reach 8,000-10,000 b/d by the end of the year. Restarting shut-in fields is a key plank of NOC’s goal of boosting output to 2 million b/d.