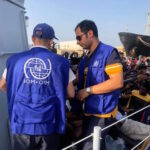 110 migrants intercepted at sea and disembarked in Tripoli

Spokesman for the Tripoli-based Naval Forces Chief of Staff confirmed “the rescue of 110 migrants of several nationalities by the Libyan Coast Guard, which returned them to Tripoli.”

Migrants were on their way to European shores on a rubber boat, the Spokesman said on his official Facebook account.

The operation witnessed giving birth among the migrants, and this was the second successful birth at sea happens while rescue operations conducted by the Libyan Coast Guard, he pointed out.

As soon as the rescue operation was completed, the migrants were disembarked at the Tripoli Naval Base and then transferred to the Anti-Illegal Migration Agency, according to the Naval Forces.

The Spokesman published pictures of IOM (International Organization for Migration) staff receiving the migrants at their disembarking place.