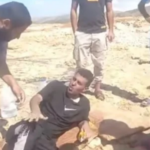 Body of an Egyptian migrant was recovered from capsized boat carrying 27 people off Tolmeitha town, east of Benghazi.

The body was recovered by members of the Tolmeitha Maritime Rescue Unit and Combating Illegal Migration Agency, following a report from the 153rd Infantry Brigade about the presence of the body.

In the past two days, the Tolmeitha Maritime Rescue Unit announced that 5 migrants had been found, noting that they had been taken to the hospital to receive first aid.

It was preceded by a rescue operation for an Egyptian migrant who was found during the last two days during the patrol of the rescue unit at sea after their boat capsized.

The unit indicated that the boat was carrying 27 migrants, confirming that the case was treated and taken to the hospital.

0 0
Previous : First military investment conference to be held in Benghazi on September 4
Next : Haftar says LNA to take action on political stalemate during visit to Kufra