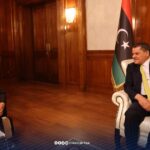 The Minister of Economy and Trade in the Interim Government of National Unity, Mohamad al-Hawij, signed an agreement with the Tunisian Minister of Trade, Fadila Ben Hamza, which includes the establishment of a joint free economic zone at the Ras Jadir crossing, according to a statement by the government of Abdul Hamid Dbeibah.

The agreement also includes lifting restrictions on the citizens of the two countries, in addition to cooperation and trade exchange, and facilitating procedures for the entry of goods of foreign origin into Libya through Tunisian ports.

The spokesman for the Dbeibah government, Mohamad Hamouda, explained that the agreement includes the formation of a joint working group to study the establishment of a joint border economic zone between Libya and Tunisia in the Ras Jadir area, as well as the freedom of movement of goods between the two countries, lifting all restrictions, and facilitating the procedures of Libyan businessmen from the two countries from administrative and financial aspects.