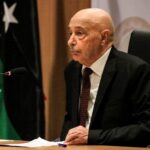 The Speaker of the Libyan House of Representatives, Aguila Saleh, warned against the continuation of the interim unity government in power under Abdel Hamid Dbeibah.

“The conspiracy that took place against Libya is bigger than what we can imagine, and it was intended to divide Libya and insult the Libyan people, but the social fabric was cohesive and all conspiracies were thwarted,” Saleh said in a speech during his meeting with citizens.

He noted that “the House of Representatives welcomed the Dbeibah government that was chosen in Geneva, which came for a fixed period of 18 months, and the day it was granted confidence, December 24, 2021, determined the end of this government’s term.”

He stated that “its tasks were to unite institutions and provide the basic requirements for citizens, national reconciliation and elections, but this government did not do anything about iall of that, and its mission ended and the House of Representatives withdrew confidence from it.”

0 0
Previous : EU Parliament urges Libyan authorities to cancel maritime MoU signed with Turkey in 2019
Next : “Unfortunately, there is no indication of any close agreement on elections in Libya,” Borrell