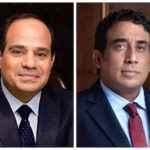 President al-Sisi stressed Egypt’s keenness on Libya’s unity, security and stability, calling for dialogue between the Libyan parties, stressing Egypt’s support for the Presidential Council in national reconciliation, unifying institutions, and expelling all foreign forces and mercenaries, in order to reach a political settlement agreed upon by all Libyans, the Office said in a statement.

Al-Menfi praised Egypt’s role in supporting the Libyan dialogue, stressing the depth of the brotherly relations between the two countries and the two brotherly peoples, stressing the importance of holding parliamentary and presidential elections, as it is the only way to reach state of stability and peace in the country, the statement pointed out.