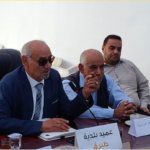 Masoud Wahrani, Undersecretary of the Tobruk Municipal Office, confirmed that he held a meeting with officials of the Italian company Enrico Ravanelli on Friday after its return to Tobruk to complete the infrastructure projects, suspended since 2014.

Wahrani said that the Company chose a place to put its equipment and build its own workshops.

The Italian company’s return came after the visit of the municipality mayor, Faraj Khattabiya, and the undersecretary, Masoud Wahrani, to Italy at the beginning of the month, and their meeting with a number of Italian officials to discuss the return of Italian companies to work in Tobruk, according to a staement by the Municipality.