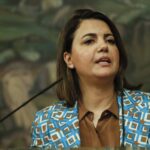 Libyan Foreign Minister, Najla Mangoush, has accused the Arab League of failing to show support for Libya after powerful Arab foreign ministers boycotted a summit hosted by the Government of National Unity in Tripoli yesterday.

Among those boycotting the gathering was Egypt, which questioned the legitimacy of Prime Minister Abdel Hamid Dbeibah’s government. The foreign ministers of Gulf monarchies Saudi Arabia and the United Arab Emirates also did not attend, as well as Arab League Secretary-General Ahmed Aboul-Gheit.

In a statement released following the conclusion of the summit, Mangoush said she has “reservations about the position of some countries that were absent due to certain negative efforts”.

“We read these negative efforts as not serving stability in my country, Libya,” she added.

Ahead of Sunday’s meeting, authorities in the Libyan capital granted a day off for civil servants and closed off major roads around the Mitiga airport, the only functional airport in the capital, and a luxury hotel where the gathering took place.