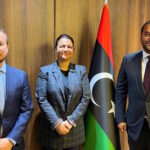 Libya’s Foreign Minister, Najlaa Manqoush, in her capacity as Chair of the Preparatory Committee for the Libya Energy and Economic Summit 2021, met today with the organizers Energy Capital & Power Company, represented by James Chester, Senior Director, and local partner of the summit Ahmed Al-Ghazali, Deputy Director of the American-Libyan Chamber of Commerce, according to Energy Capital & Power.

The Libya Energy and Economic Summit is supported and endorsed by the Office of the Prime Minister Abdul Hamid Dbeibeh and will be held in the Libyan capital, Tripoli, on 22-23 November, the Company said in a statement on its official website.

The event represents the first major in-person energy summit to be held in Libya for a decade, the statement pointed out.

The Foreign Minister welcomed the organizers of the summit and pledged to provide her support to ensure its success, it added.

She emphasized the importance of the Libya Energy and Economic Summit, which “follows and builds on the achievements of the Libya Stabilization Conference last month. The event is an important step along the pathway of establishing economic stability in Libya,” the statement said.