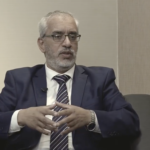 The chairman of the Civil Democratic Party, Muhammad Saad Embark, told the press on Saturday that some members of the Libyan Political Dialogue Forum (LPDF) attempt to delay the December elections  by insisting on holding the constitutional referendum first.

Embark said that those who benefit from the status quo in Libya are the ones seeking to obstruct the elections.

He warned of the return of division, chaos, and the collapse of the economy in the event the elections are postponed.