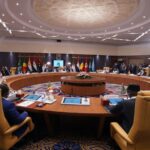 The foreign minister Libya’s neighbouring countries demanded on Wednesday “the withdrawal of foreign forces, foreign fighters and mercenaries, the unification of the military institution and the achievement of national reconciliation.”

The declaration follows a two-day meeting of the chief diplomats of Algeria, Tunisia, Egypt, Sudan, Niger and Chad, which took place in the Algerian capital.

In a joint final declaration, the foreign ministers emphasised the importance of respecting the results of the Berlin 1 and 2 Conferences, in compliance with the sovereignty, national unity and territorial integrity of Libya, “condemning the continued supply of weapons and mercenaries to armed formations, in flagrant violation of the arms embargo imposed by the United Nations, as well as deliberate attempts to sow division among Libyans by undermining all efforts to resolve the crisis in Libya”.

They also called for the withdrawal of all foreign forces, in accordance with Security Council Resolution 2,570 and the permanent ceasefire agreement.

“The ministers stressed the need to effectively implement the main priorities of the agreed roadmap, in terms of conducting the elections on the scheduled date in accordance with Security Council Resolution 2.570, the results of the Berlin 2 Conference and the roadmap issued by the Libyan Political Dialogue Forum, provided that the competent Libyan institutions lay the legal and constitutional foundations”.

The next meeting of the countries bordering Libya will be held in Egypt on a date still to be determined.

0 0
Previous : 1665 new cases and 16 deaths of COVID-19 in Libya
Next : US calls for Libya elections on December after leaked proposal controversy