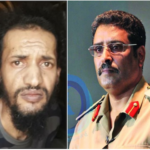 “This came after monitoring his movements and collecting important information about his terrorist activity, where he had various types of weapons, ammunition and military equipment,” Al-Mismari explained.

It is worth noting that al-Ajili is linked to the terrorist Abu Talha Al-Libi (Abdul Moneim Al-Hasnawi), who is considered one of the most prominent leaders of the extremist groups in the south-western region, and who was killed in an operation by LNA in January 2019.