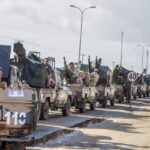 Ali Tarshani, the spokesman of the Libyan National Army’s Joint Security Room in Sabha, confirmed on Wednesday that forces of the LNA entered the southern city of Murzuq on Tuesday afternoon in coordination with the city’s residents.

Tarshani told reporters that “large military units moved to secure the cities of Murzuq and Ubari, located in the far southwest of the country, from outlaw and terrorist groups.”

“The security operation in the south continues strongly, and the past few hours have witnessed major incursions into the hideouts of gangs and militias scattered in separate parts of the city of Sabha,” he added.