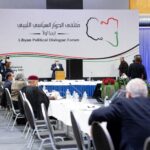 The Proposals Bridging Committee of the Libyan Political Dialogue Forum (LPDF) held its third virtual meeting on Saturday to consider four proposals, submitted by its members, for the constitutional basis for holding the upcoming general elections on December 24, said the United Nations Support Mission in Libya (UNSMIL).

“Members discussed ways to bridge remaining differences on the existing Legal Committee draft and will continue discussion on Monday to be able to submit a consolidated proposal or more to the LPDF plenary for its consideration and decision,” UNSMIL said via Twitter.

“UNSMIL stressed the criticality of time and that the constitutional basis is overdue for the adoption of the necessary electoral framework to enable the holding of elections in accordance with the LPDF Roadmap and Security Council Resolution 2570 (2021).”

1/3 Facilitated by UNSMIL, the LPDF Proposals Bridging Committee held its third virtual meeting today to consider four proposals, submitted by its members, for the constitutional basis for the holding of the elections on 24 December. pic.twitter.com/MzWt5N6ZcG

0 0
Previous : Over 320K register to vote for December elections in last 24 hours, HNEC
Next : Dbeibeh: Vaccination to be mandatory