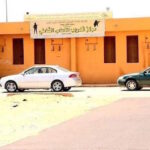 Actual work has begun on the formation of the non-commissioned officers’ school in the Southern Region, according to the Media Office of the Southern Operations Force, affiliated with the General Command of the Libyan National Army (LNA).

The Office confirmed that the school will work to inject new blood and raise the combat efficiency of the LNA forces.

0 0
Previous : Over 1,200 migrants disembarked back on Libyan shores in a week – IOM
Next : Photos | LNA conducts desert patrols across southwestern Libya