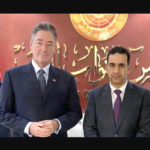 Al-Nuairi reviewed with Unmacht a number of issues related to the Libyan issue in his office at the headquarters of the Parliament’s branch in the capital, Tripoli.

According to the official spokesman for the House of Representatives, Abdullah Blihaq, the meeting also discussed ways to address issues related to the Libyan issue in order to achieve stability.