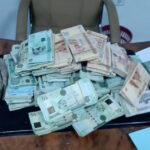 Police arrest employee embezzled 100,000 dinars from his company in Tripoli

Tajoura police station in Tripoli has arrested an employee of a commercial company, from which he embezzled 100,000 dinars (about $20,000).

Interior Ministry said the incident dated back to the company’s manager reporting a case of theft and embezzlement of funds, suspected of one of the company’s employees.

Detectives arrested the accused, who admitted to embezzling the amount.

He used his job as an accountant to steal 300 dinars on a daily basis when closing sales accounts.

The Ministry indicated that legal measures were taken with the accused, 61 thousand dinars were recovered from the stolen amount, and the case was referred to the Public Prosecution.