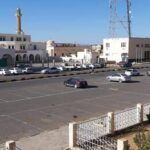 Policeman killed, another injured after bank attack in Ubari

One policeman was killed and another was injured during a Friday night attack on the Commercial Bank of Ubari town by an unknown armed group, the Interior Minister said in a statement on Saturday.

The Interior Minister condemned the attack and said that an investigation has been opened to arrest the culprits.