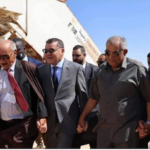 Dbeibeh in Tobruk to attend Parliament session for annual budget

Abdul Hamid Dbeibeh, Prime Minister of the Government of National Unity, has arrived at Tobruk International Airport to attend the Parliament session that will be held on Monday, the media office of the Prime Minister announced.

The Government apologized last Monday for not attending the Parliament’s session, which was scheduled to continue discussion on the annual budget for 2021.

It is noteworthy that Dbeibeh expected, during a televised interview Saturday, the Parliament to approve the budget during Monday’s session, pointing to the government’s response to the parliament’s remarks.