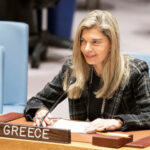 Recent Libyan-Turkish agreement is an escalation against the stability of the region, Greece told Guterres

Athens has officially condemned the new Memorandum of Understanding signed on October 3 between Ankara and the Libyan government of Abdel Hamid Dbeibah, in a letter written by the Permanent Representative of Greece to the United Nations, Maria Theofili, to UN Secretary-General Antonio Guterres.

“Greece protects all its rights under international law. Libya and Turkey are required to respect Greece’s sovereign rights and avoid any action that would violate these rights and destabilize the region,” Theophilly stated in the letter sent to Guterres.

“Greece rejected the new Turkish-Libyan agreement in the oil and gas sector, because it violates Greek sovereign rights and international law, and was a deliberate escalation that undermines stability in the region,” said the permanent representative of Greece.