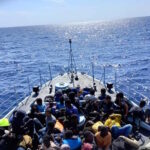 100 migrants intercepted in the Mediterranean and returned to Libya

The Tripoli-based Naval Forces intercepted on Sunday 100 migrants of several African nationalities in the Mediterranean and returned them to Zawiya west of Tripoli, according to the Navy Protocol and Information Office.

The migrants were on their way to European shores on two rubber and wooden boats, the Office said in a statement on Monday.

“As soon as a distress call was received, the boat Al-Zawiya of the marine point of Zawiya was moved after being equipped with the necessary capabilities for the rescue and recovery operation to the north of Zuwara Abu Kamash,” the statement explained.

“As soon as the rescue operation was completed, the migrants were disembarked at the landing point at the Zawiya Oil Refinery and handed over to the competent authorities in Zawiya,” it added.