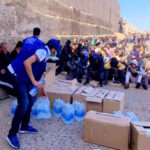 Tripoli-based Coast Guard and Port Security managed in two separate operations to rescue 168 migrants of several nationalities, who were on their way to European shores, according to the Army’s Chief of Staff in Tripoli.

The migrants were on two wooden boats, and as soon as the rescue operation was completed, they were disembarked at the Zawiya refinery point west of Tripoli, where they were handed over to the competent authorities in the Zawiya, the Chief of Staff said.

It added that the Anti-Migration Agency would follow up on the migrants and complete procedures for safe deportation to their countries.