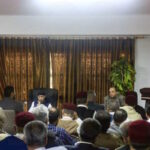 The Speaker of the Libyan House of Representatives (HoR), Aqila Saleh, met in al-Qubba, a number of political and social leaders in the Cyrenaica region.

HoR spokesman, Abdulla Bleihiq, said that the meeting, which came in response to the delegation’s request, discussed the latest developments in the country.

The delegation demanded of activating the 1951 constitution, and to emphasize the federal system in drafting any constitution for the country.

The 1951’s constitution was the first constitution of Libya under the rule of the king of the United Kingdom of Libya, Idris al-Senussi.