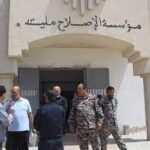 The Interior Ministry of Dbeiebh’s government confirmed that the Tawila Police Station of the Sabratha Security Directorate managed to arrest 9 fugitives from the Mellitah Correctional and Rehabilitation Institution.

The ministry indicated that the fugitives were arrested and returned to the same prison, and a list of fugitives’ names was circulated to all security checkpoints.

On his part, Judicial Police spokesman Ahmed Boukraa revealed that 60 prisoners were arrested and returned to prison.

Boukraa said in press statements that the escape took place following a rebellion in the Reform and Rehabilitation Institution in Mellitah, which led to the death of a policeman and the escape of nearly 170 prisoners.

He pointed out that some of the escaped prisoners surrendered voluntarily, and some were arrested, stressing that they are still within the administrative borders of the region.

0 0
Previous : Next UN envoy to Libya will be an African, Italian press reports
Next : Libya oil exports hit an 18-month low amid field closures