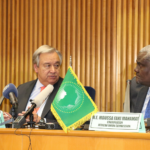 Next UN envoy to Libya will be an African, Italian press reports

The next special envoy of the U.N. Secretary General in Libya and head of the country’s U.N. political mission UNSMIL “will be an African,” Italian news agency Nova reported on Tuesday, citing unnamed western diplomatic sources close to the Libyan dossier based in Tunis.

This comes a week after the Security Council unanimously renewed the mandate of UNSMIL for another three months, until 31 July.

In the resolution, the Council “invites” U.N. Secretary General Antonio Guterres, “to promptly appoint a new representative” in the North African country. This passage in particular, according to the sources of Nova, was requested by Russia.

0 0
Previous : USAID update international, Libyan partners on its support for GECOL
Next : 170 prisoners escape from Mellitah prison west of Tripoli