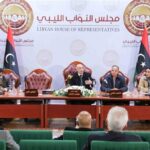 Thirty members of the Libyan Parliament demanded the Speaker, Aqila Saleh, to present the unamended 1951 constitution to the Parliament for deliberation regarding a return to the federal system in Libya.

According to the text of the request signed by 30 deputies from Cyrenaica region, they demanded “to amend the unamended 1951 constitution, with the need to deliberate the matter in a private session broadcasted live to consider a return to the federal system in accordance with the three historical regions, Cyrenaica, Tripolitania, and Fezzan.”

The deputies said: “In this context, we ask our brothers and partners from the regions of Tripolitania and Fezzan to support this request, which we see as the real guarantor of the unity, security and safety of Libya at a time when all these matters are under threat.”

Libya issued its first constitution in 1951 under the rule of Idris Senussi I, the king of the United Kingdom of Libya. The constitution was amended in 1964, where the federal system was cancelled and it became Kingdom of Libya. Later in 1969, Muammer Gaddafi led a military coup against the kingdom and ruled the country for 42 years, until he was killed in 2011 uprising.