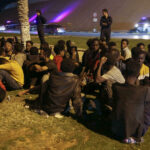 According to theNavy, the migrants had stayed at sea for three days and were going to drown when the patrol saved them.

It noted that the migrants comprised of 11 women and seven kids, further saying that they were moved to Tripoli Naval Base, given humanitarian and medical aid, and taken to the anti-migration department.