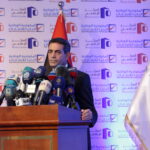 “The candidate registration platform has received the papers of 98 candidates who met the conditions,” the head of the electoral commission, Imad al-Sayeh, said a press conference in Tripoli.

Saif al-Islam Muammar Gaddafi, Khalifa Haftar and current prime minister Abdul Hamid Dbeibeh are among those who made a bid for the presidency.

After the registration closed, the HNEC will vet all the applicants and present a list of those allowed to compete in the first round of the presidential race.