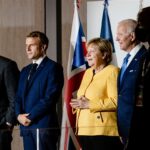 The embassies of France, Germany, Italy, U.K. and U.S.  in Libya welcomed on Wednesday the efforts of the High National Elections Commission (HNEC) in implementing “the technical basis for successful elections” as the commission concluded the registration of candidacies in the upcoming presidential elections on December 24.

“As was already clear with the level of voter registration, the significant number of submissions is a further proof of the determination of the Libyan people to participate actively in the democratic process,” the five countries said in a joint statement.

“We express our full support to the Authorities responsible for the judicial review of candidacies and call upon all actors to respect their decisions,” reads the statement.

The western countries also called on called all Libyan parties to commit to hold “free, fair, inclusive and credible presidential and parliamentary elections on the 24th December 2021 and urge all international actors to encourage and support the democratic transition.”