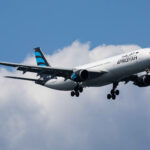 Afriqiyah Airways, a state-owned airline based in Tripoli, made today the first flight between the capita’s Mitiga Airport and Labraq Airport, which is based in eastern Libya.

Jalal Al-Mahshah, the spokesman of Larbraq Airport, told reporters on Thursday that this is the first passenger flight in the airport since October 2017. He also announced that the airport will resume international flights next week.