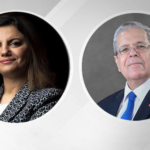 Tunisian Foreign Minister, Othman Jerandi, confirmed that border crossings with Libya will be reopened as soon as the Ministry receives notification from the Tunisian committee concerned with confronting COVID-19.

Mangoush inquired from her Tunisian counterpart about the circumstances of the continued closure of the border crossings on the Tunisian side, and explained to him the suffering of citizens on both sides, Libyans and Tunisians, as a result of the closure continuation, especially families and patients.

It is noteworthy that Libya had announced on Thursday reopening its border crossings with Tunisia.