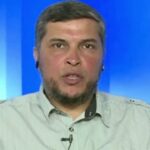 Al-Dargash: Elections will fail if Haftar and Saif al-Islam run for office

Marwan Al-Dargash, a political activist close to the ousted Mufti Sadiq Al-Ghariani, believes that the elections will be doomed to failure if certain Libyan figures are allowed to participate.

He said that Field Marshal Khalifa Haftar, Saif al-Islam, Fathi Bashagha and Khaled Al-Meshri are among those that he believes shouldn’t be allowed to run for office.

Al-Dargash praised Nouri Abusahmain, former president of the General National Congress of Libya, describing him as an “honorable patriot”

Abusahmain had suggested that what he called “controversial personalities” should sign a pact of honor not to run in the presidential elections.