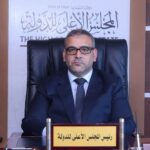 Khaled Al-Mishri, the chairman of the High Council of State, said on Friday that he wants the upcoming elections on December 24 to be postponed until February next year as he considers the ongoing electoral process to be “flawed” and “strange”.

Al-Mishri, who is closely associated with the Muslim Brotherhood, criticized the performance of the High National Election Commission (HNEC), and said he proposed in his initiative the creation of an “independent body that arranges the elections with the technical capacity, independence and impartiality”.