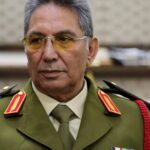 A member of the 5+5 Joint Military Committee denounced on Saturday accusations that the committee has overstepped its specialization by demanding the withdrawal of mercenaries and freezing military deals with foreign countries.

Maraj al-Amami, who represents the Libyan National Army (LNA) in JMC, told a local TV channel, said the committee has began taking steps towards removing foreign forces and mercenaries, which he emphasized to be an integral part of the ceasefire agreement.

“There is support from world countries towards the exit of foreign forces and mercenaries,” he said. “We decided to the U.N. Mission regarding this issue so that the elections would be successful in Libya”.

“Every Libyan would not accept the presence of a foreigner on his or her soil,” he added.

“There is no doubt that the attack on the committee did not come from the general Libyan people, but rather from supporters of Turkey and the Muslim Brotherhood in Libya,” the LNA general said.

Al-Amami reiterate that his committee has the support of the U.N. Mission in Libya and its working towards achieving the outcomes of the first and second Berlin conferences.