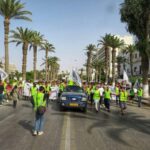 TRIPOLI/BENGHAZI, Libya, July 1 (Reuters) – Fury at Libya’s feuding leaders boiled over on Friday as protesters stormed the parliament building in the eastern city of Tobruk and staged the biggest demonstration for years in the capital Tripoli, in the west.

The Tobruk protesters, accusing the parliament of treason and stealing public money, some eight years after its election, broke into the building and set fire to parts of it as armed forces there withdrew.

In videos posted online and confirmed by city residents, the demonstrators shouted and cheered as flames licked up the side of the building.

With political factions squabbling over control of government after failing to hold a scheduled election last year, Libya has been thrust back towards territorial division and civil war as state services gradually collapse.

Protests over chronic power cuts brought demonstrators onto the streets of several cities, braving the wrath of armed factions to voice their anger at failures that have made life intolerable during the sweltering summer months.

Other protests of dozens of demonstrators also took place in each of Benghazi, al-Baydha and Misrata and some smaller towns, showing how anger at the situation extends across the frontlines of power between the country’s rival forces.

0 0
Previous : UN Adviser on Libya: Peaceful protests should be respected, but riots and vandalism are unacceptable
Next : Protests continue in various cities of Libya