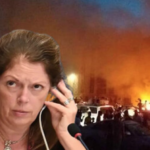 UN Adviser on Libya: Peaceful protests should be respected, but riots and vandalism are unacceptable

Commenting on Friday’s demonstrations that took place in several Libyan cities, Stephanie Williams, UN Special Adviser on Libya, said “the people’s right to peacefully protest should be respected and protected but riots and acts of vandalism such as the storming of the House of Representatives headquarters late yesterday in Tobruk are totally unacceptable.”

“It is absolutely vital that calm is maintained, responsible Libyan leadership demonstrated, and restraint exercised by all,” Williams tweeted on Saturday.

On Friday evening, angry demonstrators set fire to the House of Representatives headquarters in Tobruk, storming it after dozens gathered in front of the building to demand the dissolution of HoR, the holding of elections and holding all political bodies responsible for the deteriorating situation in the country, according to photos and videos circulated on social media platforms.

Before setting the fire, the demonstrators stormed the building to demand its dissolution, declaring their authorization to the Presidential Council to take this step and to supervise the holding of presidential and parliamentary elections before the end of this year, according to a constitutional rule agreed upon by all.

Another demonstration in Tripoli on Friday demanded expedition of holding presidential and parliamentary elections, removing all foreign forces and mercenaries, in addition to solving the electricity crisis.

The demonstrations came to denounce the continued deterioration of living conditions, to express the rejection of the current political bodies in power and the holding of elections without delay.

These demonstrations erupted due to the crisis of long-term power outages in the capital and all Libyan cities, which have increased these days in conjunction with the rise of temperatures, despite the promises of the unity government headed by Abdel Hamid Dbeiebh to address it.