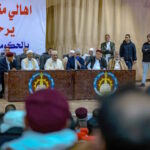 The new Libyan Prime Minister, Fathi Bashagha, called Sunday on the people of the Oil Crescent region to open the oil ports for exporting, provided that revenues are managed according to a fair and transparent mechanism among all Libyans.

During his meeting with the people of the Oil Crescent region, Bashagha affirmed the sincerity of their fears, stressing the government’s keenness not to dispose of oil revenues in violation of the law.

The Prime Minister said, “We are now working with all force and seriousness to present the draft budget to the House of Representatives; a fair, transparent and very clear budget.”

Bashagha stated that the budget will include funds allocated to support municipalities, which will contribute to eliminating centralization and facilitating the provision of services to all citizens.

He added: “We have extensive contacts with several local and international parties to set up a transparent mechanism that ensures that oil revenues are not exploited and that these revenues are kept in the accounts of the Libyan state away from political conflicts, so that we ensure that these funds are for the benefit of the Libyan people.”

It is noteworthy that the Libyan Prime Minister listened during the meeting to the problems that the region suffers from in light of the deteriorating living conditions and services.