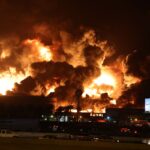 Bashagha’s government expressed its “full support” for Saudi Arabia when it comes to “defending its security and stability, which is an integral part of the national security of the Arab and Islamic nation.”

The Saudi energy ministry said the kingdom strongly condemned the “sabotage attacks”, reiterating that it would not bear responsibility for any global oil supply disruptions resulting from such attacks, state news agency SPA reported, citing an official in the ministry.