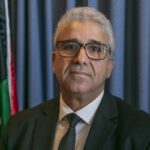 Prime Minister-designate Fathi Bashagha announced on Saturday that his government will soon enter Tripoli to take over and carry out its duties.

In an interview last night with the local broadcaster Al-Wasat, Bashagha did not disclose how he will enter the Libyan capital where his predecessor, Abdul Hamid Dbeibeh, resides as he refuses to hand over power. Bashagha did not also elaborate on the date for entering the capital.

In the interview, Bashagha has expressed strong criticism of Dbeibeh, accusing him of having obstructed the failed elections last December. He also stressed that Dbeibeh’s “lack of commitment” to his promise not to run for the presidency “was one of the important reasons that hindered” the electoral path.

“Dbeibeh had no intention of holding elections from the start, and he informed external and internal parties that [his government] would last two years or more and that there would be no elections,” Bashagha said.

0 0
Previous : US unveils proposal for managing Libyan oil revenues
Next : 953 new people test positive for Coronavirus, 7 others dead in Libya