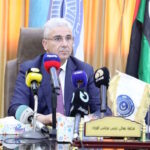 The Libyan Prime Minister, Fathi Bashagha, said Sunday that the great popular movement in support of the Libyan government in the East, South and West gives us hope that “the brave national spirit will triumph over the gang of corruption that thought it could buy home with “haram” money.”

Bashagha explained that the Western Region Forum clearly indicates the aspiration of the honorable Libyan people for the establishment of a civil and democratic state.

The Libyan government stressed the need to communicate with everyone and in all parts of the country, so that it can implement its goals of holding presidential and legislative elections as soon as possible.