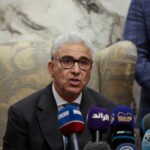 The government of Prime Minister-designate, Fathi Bashagha, released a statement on Tuesday in which it notifies “everyone, without exception, that there will be injustice or fighting with those who side with legitimacy and choose the homeland.”

“We extend our hands in peace and seek to prevent bloodshed, and whoever bears arms against the government will be pursued by law,” reads the statement of the government.

The statement’s release follows appeals by the United States and the United Nations for Libyan parties to refrain from use of violence amid growing mobilization of forces in Tripoli, which could escalate into conflict.

Tripoli is torn between armed groups loyal to Bashagha, who was selected by the House of Representatives to lead the country as interim premier last February, and groups which support Abdul Hamid Dbeibeh, who refuses to relinquish power and remains recognized as the country’s leader by the international community.

After several abortive attempts to enter Tripoli, all of which led military confrontations, Bashagha decided to settle his government in Sirte in order to “avoid bloodshed”. However, he indicated on multiple occasions afterwards that he is still keen on assuming office in the capital.

“Pardon, forgiveness and reconciliation for everyone who joins us under the banner of legitimacy and works under the authority of the state we represent,” concludes the statement of Bashagha’s government.

0 0
Previous : UN warns against use of violence to resolve legitimacy claims in Libya
Next : Turkish delegation in Misurata for talks on executive authority dispute