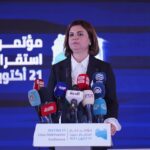 The BBC released a footage clip of a recent interview with Libyan Foreign Minister Najla Mangoush, which shows her talking about the possible extradition of a  new Libyan suspect in Lockerbie bombing case. This refutes a statement released yesterday by her ministry, in which she “categorically denied” any mention of the suspect in the aftermath of her suspension by the Presidential Council.

In the interview clip, Mangoush was asked about the possibility of extraditing Abu Agila Mohammed Masud, a former Libyan intelligence official suspected to be involved in the 1988 bombing.

“I don’t know but I think we, as a government, are very open in terms of collaboration in this matter,” she said. “We understand the pain and sadness of the victims and the families. We need to also respect the law,” she added.

“But it is progressing, you think?,” the interviewer asked, to which Mangoush replied, “yes, it is”.

After the Libyan media reported that Mangoush is discussing Masud’s extradition with the U.S., the top diplomat was suspended and placed under investigation by the Presidential Council due to “unilateral foreign policy decisions”. However, the government quickly jumped to her defense and deemed the suspension as “illegal”.

Mangoush then released a statement via the Libyan foreign ministry, in which she “categorically denied” any mention of Masud.

The minister even warned against “the circulation and dissemination of false and misleading news to public opinion because it is considered a crime punishable by law”.