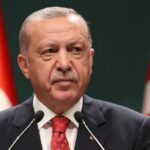 Berlin Conference to pressure Turkey to remove troops out of Libya, report say

ISTANBUL – Turkey is expected to come under pressure to remove its military from Libya when world leaders gather Wednesday at a conference in Berlin, Voice of America reports on Tuesday.

Citing analysts, the American broadcaster said that the key goal of the conference is the creation of a framework for the withdrawal of all foreign fighter, including Turkish soldiers.

“Good governance is very difficult to establish in Libya. There are arms everywhere, there are militias everywhere,”Aya Burweila, a visiting lecturer at the Hellenic National Defense College, told Voice of America.

“So, the presence of foreign powers really undermines that. Libyans want them all out. They want a normal country. Most of all, they want elections at the end of the year,” Burweila added.

0 0
Previous : Washington in talks over removal of foreign fighters from Libya, says US ambassador
Next : 4 French executives charged with spying on anti-Gaddafi figures in Libya