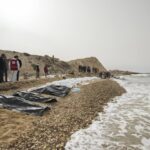 The bodies of 17 migrants who were attempting to reach Europe have been found off Tunisia’s northeast coast, the country’s civil defense said today.

The bodies washed up off Cape Bon, a peninsula on the strait of Sicily, between yesterday and today, spokesman Moez Triaa told AFP.

“The majority were from sub-Saharan Africa but there were also Syrians,” Triaa said, without providing details on where they had set off from or the circumstances surrounding their deaths.