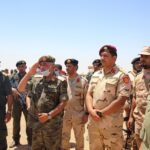 A military committee of the Libyan National Army (LNA), led by LNA’s Chief of General Staff Abdel Razek Al-Nadori, has ordered border patrols in southern Libya to increase capacity of work to secure the country’s borders following a recent wave of violence in that region.

The committee stressed upon “the importance of raising the combat efficiency of the armed forces’ units,” according to a statement by the LNA’s Media Division. It also ordered the opening of training centers for new units.

New security checkpoints for the LNA patrols would also be established in the region, stated the Media Division.

0 0
Previous : Power returning to east Libya after black out last night
Next : Over 320K register to vote for December elections in last 24 hours, HNEC