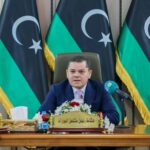 “We have a problem with Belgium. The Belgian authorities… are trying once again to seize Libyan funds in Belgium,” Dbeibeh told a cabinet meeting, explaining that Belgium had sought permission from the UN Security Council’s sanctions committee to seize the funds.

The UN Security Council placed Libya’s foreign assets in receivership during the country’s 2011 uprising against the regime of longtime ruler, Muammar Gaddafi, to avoid possible theft.

Dbeibeh pointed out that his government may have to “withdraw” all Libyan assets from Belgium when the freeze is lifted, noting that a Libyan delegation will travel to Brussels next week to settle the issue.

Libya’s funds in Belgium are the subject of a dispute that also involves Belgian Prince Laurent, brother of King Philippe, who has been seeking compensation from Libya after his charity, the Global Sustainable Development Trust, invested tens of millions of euros in a reforestation project that never went ahead due to Gaddafi’s fall.