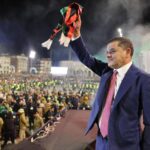 Libya’s incumbent Prime Minister Abdul Hamid Dbeibeh announced a series of populist spending plans on Friday as he sought to strengthen his position against a push by the parliament to replace him with the premier-designate Fathi Bashagha.

Dbeibeh, who has sworn only to hand over power after an election, pledged help for Libyans buying land and homes, and said he would raise some state salaries and continue to subsidize weddings.

He made the announcement during a government-organized celebration of the 11th anniversary of the Libyan popular uprising that toppled the decades-long reign of Muammar Gaddafi on February 17.

Dbeibeh said that, starting on Sunday, his government will grant 50,000 plots of land to young people across the country. He added that the country’s Savings Bank will also grant housing loans to the beneficiaries of these plots of land.