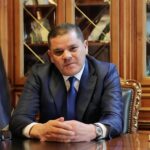 On security, the initiative proposes plans for security the upcoming elections in December, unifying the military institution and removing foreign fighters.

On election legitimacy, the initiative seeks to urge parties to finalize the legal basis for elections.

The initiative also outlines plans for addressing the issue of social fragmantation and equal distribution of resources, within the pillars of national reconciliation and economic recovery, respectively.