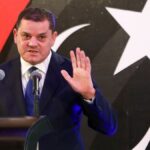 BERLIN – Libya’s prime minister, Abdul Hamid Dbeibeh, said on Wednesday that his government is looking forward to more help from the international community on the issue of removing foreign fighters out of the country.

“There are mercenaries who control the political decision in some areas, and foreign forces are used in a political way,” Dbeibeh said in his speech during the second Berlin Conference on Libya.