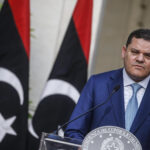 Dbeibeh was pressured by US to pay LNA salaries, sources say

The government of Abdul Hamid Dbeibeh, faced pressure from the United States to disburse funds to the Libyan National Army (LNA), led by Field Marshal Khalifa Haftar, for salary payments to its soldiers, U.N. diplomatic sources told The Libya Update.

Dbeibeh’s government withheld first quarter paychecks for the soldiers after LNA announced its support for Dbeibeh’s rival, Fathi Bashagha, who was designated as interim premier by the House of Representatives a month ago.

However, the LNA revealed last week that the government finally disbursed the funds of the this year’s first quarter paychecks.

“Due to the suspension of the salaries, a state of distrust and great disturbance was created about the government’s negative role in supporting the military track,” said the sources, which requested anonymity.

The sources pointed out that the decision of the 5+5 Joint Military Committee to stop its negotiations is a dangerous and unfortunate indication of escalation”.

“The United States is completely dissatisfied with the provocations made by Dbeibeh’s government against other Libyan parties,” the sources claimed. “[U.S.] fears the outbreak of war again because of this recklessness”.